In 1981, the Belgian Society of Oto-rhino-laryngology published a four-volume work entitled "Naissance et development de l'Oto-rhino-laryngologie dans l'histoire de la medicine” (The birth and development of Oto-rhino-laryngology in the context of the history of medicine) in the then Acta Oto-Rhino-Laryngologica Belgica1. This very rich, almost  1700-page work, written in French, was honoured by Dr. Jacques Willemot (Ghent) with contributions from Belgium, France, Germany, Italy, and the United Kingdom. Dr. Jacques Willemot provided a very complete historical overview with a comprehensive bibliography, a comprehensive index of personalities, and a chronological table summarizing the development of the specialty from the very beginning.

The following is a brief description of the founding history of the Society. For more detailed information, please refer to the references below.

According to Willemot (19962) and Hennebert (19813), the Society was founded on June 10, 1890, by Charles Delstanche (Brussels 1840-1900) as an informal circle of friends called "L'Amicale des Oto-laryngologistes belges".  They gathered monthly and published in the "Journal de la Société Royale des Sciences Médicales et Naturelles de Bruxelles" until July 27, 1895. Six members directed the association: Charles Delstanche and Alphonse-Julien Capart Sr. from Brussels, Eugene William Eeman from Ghent, G. Jules Hicguet from Brussels, Fernand Schiffers of Liège, and Wilfried Schleicher from Antwerp. They were also successive presidents of the circle. 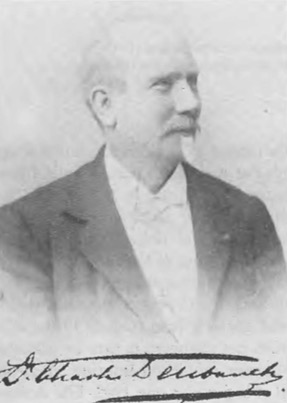 On June 16, 1895, at their sixth annual meeting (1895-1896), the statutes of a ‘'Société d'Otologie et de Laryngologie belge’' were prepared by the six founders of the circle of friends. These statutes were approved at a meeting on February 23, 1896. Their scientific articles have been published in the Bulletins of the Société Belge d'Otologie et Laryngologie.

This Society continued with the work of the previous scientific meetings held since 1890. The six previous presidents were appointed honorary members, and the first chairman of the new Society becomes was Arthur Delie (Ypres and Brussels 1855-1938). The statutes of the Society  were revised on November 7, 1897, and again June 19, 1898, and the name of the Society was changed to Société Belge d'Otologie, Laryngology et Rhinology. Other amendments to the statutes of the Society took effect on June 24, 1900, and June 1, 1902.  The Society became a recognized professional association on June 3, 1911, as shown in an annex to the Belgian Official Gazette. The first article reads: "Société Belge d'Otologie, Rhinologie et Laryngologie, fondée à Bruxelles en 10 June 1890, est constituée en Union Professionnelle." This adjustment was made under the law on legal personality. Between 1915 and 1918, the Society became silent as a result of the First World War.

The magazine became trimestral and and then semestrial in 1928. Between 1929 and 1931, the name changed to “Journal Belge d'Oto-Rhino-Laryngologie,”  as defined in an annex to the 1929 public magazine. Between 1932 and 1942, the name of the magazine was changed to "Bulletin.” The Second World War  again stopped the publication. In 1945, the "Acta Oto-Rhino-Laryngologica Belgica" was created, which appeared for the first time in 1946. The Acta was not only distributed to members but also made available by subscriptions to libraries and universities. In the same year,  the decision was made to serve the professional interests within the scientific association. A split, however, took place with the establishment of a separate professional association in 1953 under the auspices of O. Godin. The addition of cervico-facial surgery as a sub- area of ​​our specialty was made in 1982.

In 1995, on the occasion of its 100th anniversary, the association was designated by King Albert II as the Royal Belgian Society for Oto-Rhino-Laryngology, Head and Neck Surgery.